This blog may not turn out to be quite as dramatic as my title suggests, but hopefully you’ll carry on reading and hopefully it will provoke you to have your own thoughts on the subject matter.

Like me I’m sure you get into many conversations around Voice of Customer programmes, and if the conversations you have are anything like the ones I have at some point you’ll get around to talking about Customer Experience metrics – be that NPS, Customer Satisfaction, Customer Effort etc – I’m sure you can add a few others to that list.

It’s at this point, when people are too focused on the actual metric, that I tend to glaze over a little. Not because I find the topic particularly boring, or indeed find them boring – it’s because I’d class them as a measurebator – someone who gets so engrossed in the numbers/metrics that they miss the whole point of seeking customer feedback.

But what has this got to do with any laws?

Well, there are a few laws/theories that I’ve come across that I think help explain such behaviour. The first of this is the phenomenon of doing something, only to make things worse – sometimes known as the Cobra Effect.

The name stems from the time of British colonial rule in India., where the government at that time became concerned with the growing number of venomous cobra snakes, and offered a reward for every dead snake. Initially this strategy worked as large numbers of snakes were killed for the reward. Eventually, however, Indians spotted an opportunity and began to breed cobras in order to then benefit from the reward. When the government realised this, the reward was cancelled and the cobra breeders simply set their snakes free and the wild cobras consequently multiplied.

Bringing this onto the world of customer metrics a possible example night be that if you have a low NPS score and all you focus on how this compares to your competition, then all your doing is focusing on the number, the whole number and nothing but the number and you’re not focusing on what customers have to say about the service you’re delivering. This means it’s highly likely that you won’t understand what’s really important to them and will miss out on opportunities to improve your service delivery – the unintended consequence being that your NPS could decline.

Hopefully your mind is now suitably adjusted to where my thinking is.

Economic theory next with a model which paraphrases to “when a measure becomes a target, it ceases to become a good measure”.

This was put forward by Charles Goodhart and is known – as you’d probably expect –  Goodhart’s law. The logic underlying this theory is that as soon as you set targets for a measure, people will attempt to play the system. In my world this means that when you begin to set targets or performance measures, people will play the system. The most obvious example of this is when you purchase a new car from a franchised dealer.

Picture this. You’ve agreed on the car, you’ve agreed on the price you’ll pay, and you’re getting on well with the salesperson, all is going well until – BOOM!! The salesperson says something like “You may get a telephone call about the service you’ve received today, and it’d be great if you could rate me highly”, and I’m like: 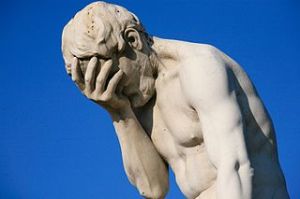 They may even try to gamify it even more with the offer of being entered into a prize draw, and I’m like:

The point is that the salesperson is attempting to manipulate the score to reflect well on themselves. This not only misses the point that gathering the feedback should be to help move the business forward, but also that the actual service delivery is important. A customer shouldn’t feel obligated to complete the survey just because the sales person mentioned it – they should feel compelled to do so by the service itself, be that good, bad or downright indifferent.

So next time you see a customer metric, or read an article on customer measurement, ask yourself “are they breaking the law?”

One thought on “Breaking the Law”